With this tool you can convert from Watts to Amps , you will also find the formula and the explanation of how to perform the conversion.

Some  examples , the most common power factors , the main definitions and finally the  table of equivalences from Watts to Amps .

With the following formulas you can convert Watts to Amps manually , if you want to convert automatically you can use the  initial Watts to Amps calculator . 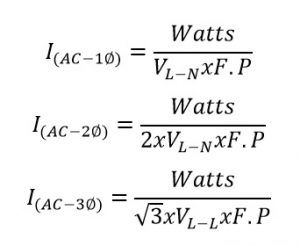 The value of the Watts is specific to each team and the larger the value, the greater the energy consumption it will have.

Generally the devices that have this type of voltage are LED luminaires , DC motors, electronics such as cell phones, televisions, computers etc, these devices always have to convert from AC / DC through a transformer, this in order to be able to connect them to AC voltage, That is common in homes.

Before converting from watts to amps you should be clear about the formula of watts to amps, in this article we show what are the steps to perform the conversion.

To convert from watts to amps, you should know three variables : The watts, the type of voltage (AC or DC), the number of phases for AC electrical systems (Three-phase, single-phase or two-phase) and the power factor.

Commonly the watts and the voltage appear on the electrical equipment’s characteristic plates (See figure 1), however explicitly the number of phases and the power factor do not appear, so these latter values ​​must often be deduced in the case of number of phases or estimate based on the typical power factor tables  .

For the previous case we can deduce that the number of phases of the equipment is 2 (two-phase) , this is deduced by the type of connection and the voltage (See figure 2), in fact knowing the number of phases in this way depends a lot on the experience ( Voltages in the world )

On the other hand there is the power factor which is typical of each equipment and is on the nameplate, in case you do not have this factor you can see the tables of typical power actors .

⭐Steps to calculate or convert from Watts to Three Phase Amps: 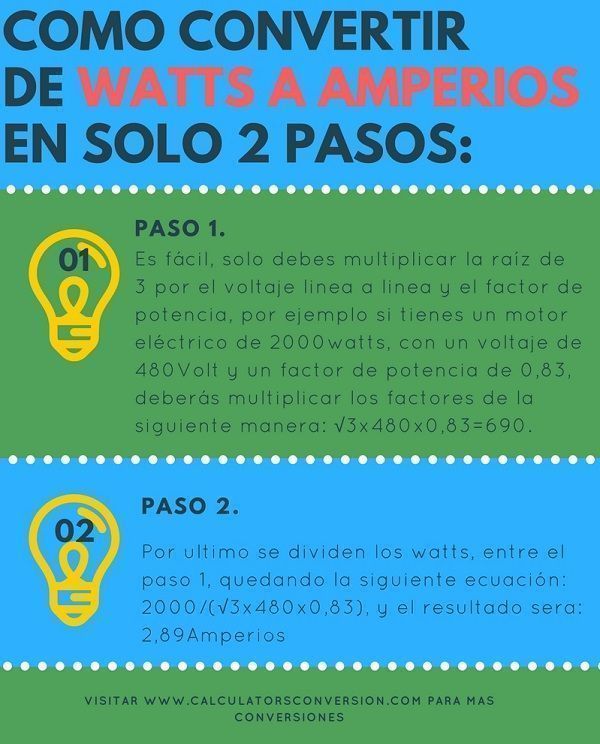 You must identify which is the formula that serves you (AC, DC, three-phase, single-phase, two-phase), then it is only to replace each variable, in the case of three-phase systems, you must only multiply the root of 3 by the line-to-line voltage and the power factor , for example if you have a 2000watts electric motor, with a voltage of 480Volt and a power factor of 0.83, you must multiply the factors as follows: √3x480x0.83 = 690.

Note: if you do not know the power factor you can have the typical values ​​for many devices  here

🔥Examples of Watts at amps:

To help you understand the conversion of Watts to amps we present many examples and exercises of watts to amps.

Example 1, convert the watts of a wifi antenna to amps:

In a summer house there is a Wi-Fi antenna with 800Watts (AC), the antenna is connected to a neutral line voltage of 127V and according to the equipment’s rating plate they have a power factor of 0.98 , how much amperage will the Wi-Fi antenna have? .

Rta: //  The easiest way is to perform the calculation automatically with the watts to amps conversion tool.

The other form of conversion is to perform the calculation manually, the first thing you should do is identify the watt-amp formula  that works best for you, in this case it will be the formula for single-phase AC systems, then you must enter the variables as they appear in the formula, in summary only the single-phase voltage must be multiplied by the power factor (127Vx0.98) , then the watts must be divided by the result of the previous equation as follows: 800 / (127 × 0.98) = 6.43A.

Example 2, how to convert watts to from a forklift to amps:

In a warehouse there is a three-phase forklift (AC), which has a consumption of 5000 Watts , with a line voltage of 240V and a power factor of 0.82 , what amperage will the forklift have ?.

Example 3, conversion from watts to amps for a metal halide lamp:

These are the tables of watts to amps for most common equipment , in them you will see that the conversion of watts to amps is different due to variables such as voltage, power factor and even internal functioning of the equipment.

Table of watts to amps for appliances:

In this table you can see the equivalent of watts to amps for the most used appliances in a home.

In this table you can see the equivalent of watts to amps for a voltage of 120V and a power factor of 0.8.

Table of watts to amps in 12V:

In this table you can find the conversion in DC for 12V equipment.

The equivalence of 1 watts in amps:

There are several answers for this conversion depending on the type of AC or DC current, power factor etc, however the simplest answer is  0.01 Amps, for AC voltage, power factor equal to 1 and 120V voltage.

600 Watts to how many amps is equivalent:

2000 Watts to how many amps is equivalent:

🎯Definitions of watts, amps and volts:

Amps are the flow of electricity that is measured as electric current . You can see the amps as the flow of water through a pipe. The more water passes through the pipe, the stronger the current.

Volts are used to determine how much force is needed to make electric current flow . According to the previous example, you could think of volts as the pressure imposed on the water in a pipe, which causes the force for the water to flow.

The amps multiplied by volts are the watts, which is the measure used to determine the amount of energy consumed by electrical equipment. The higher the wattage, the greater the power in watts. In terms of the example of water, watts referred to the amount of water that has been released.

💡How to use the calculator:

Initially you must enter the Watts that you want to convert, this information can be found on the nameplate of each equipment, then choose the type of system and the number of phases from several options ( single – phase -1F-AC, single- phase three-phase-2L -AC, biphasic -2F-AC, trifasico -3F-AC or DC), the difference between trifilar-2L-2F monophasic and biphasic system is that the source voltage is different , for the case of the source 2L is monophasic , while for 2F the source is three-phase, the above although these systems could have the same voltage.