With this tool you can calculate and convert in 1 only step from Watts to volts easily and for free.

Formula to convert, calculate and transform from watts to volts, single-phase, two-phase and three-phase:

How to convert from watts to volts in 1 only step: 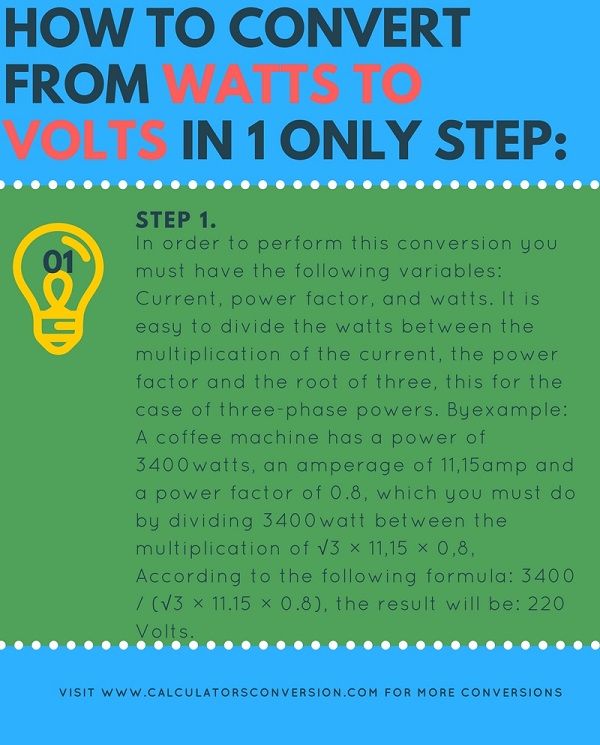 In order to perform this conversion you must have the following variables: Current, power factor, and watts. It is easy to divide the watts between the multiplication of the current, the power factor and the root of three, this for the case of three-phase powers. By example: A coffee machine has a power of 3400watts, an amperage of 11,15amp and a power factor of 0.8, which you must do by dividing 3400watt between the multiplication of √3 × 11,15 × 0,8, According to the following formula: 3400 / (√3 × 11.15 × 0.8), the result will be: 220 Volts.

Examples of conversions from watts to volts:

Note: The previous conversions take into account a power factor of 0.8, an amperage of 10 Amp and a three-phase AC power. For different variables you should use the calculator that appears at the beginning.

How to use the watt-to-volt calculator:

Initially you must have the watts you want to convert and the amps and power factor, with that in mind you must go to the initial table and choose the type of current you want AC or DC and the number of phases in case of choosing AC, then you must enter the data shown on the left side of the tool, it is important to check what is requested in the table because according to the requirement you must enter watts 1F, 2F, 3F, then you must enter the factor of power and finally the amperage.