With this calculator you can convert in a single step from Volts to Watts automatically, easily, quickly and for free.

Formula to convert, pass, calculate and transform from volts to watts, single-phase, two-phase and three-phase: 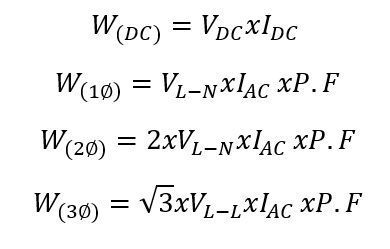 How to convert from volts to watts in 1 single step: 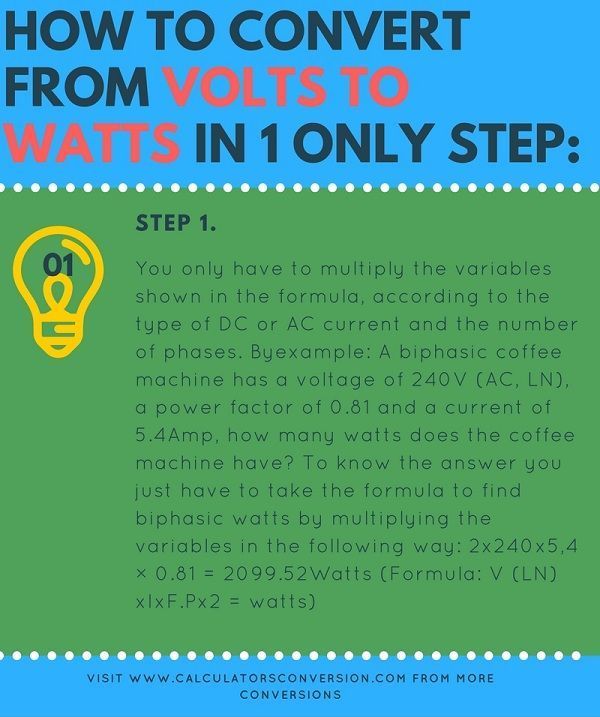 You only have to multiply the variables shown in the formula, according to the type of DC or AC current and the number of phases. Byexample: A biphasic coffee machine has a voltage of 240V (AC, LN), a power factor of 0.81 and a current of 5.4Amp, how many watts does the coffee machine have? To know the answer you just have to take the formula to find biphasic watts by multiplying the variables in the following way: 2x240x5,4 × 0.81 = 2099.52Watts (Formula: V (LN) xIxF.Px2 = watts).

Examples of conversions from volts to Watts:

A biphasic hair dryer has an AC voltage of 220V (LL), an amperage of 8Amperes and a power factor of 0.96, which will be the power in watts of the hair dryer ?.

The lighting of an industry has a three-phase voltage of 480Volts (LL), a power factor of 0.87 and an amperage of 200Amp, how many Watts does the lighting have ?.

Note: The previous conversions take into account a power factor of 0.8, an amperage of 10 Amp and a three-phase AC power. For different variables you should use the calculator that appears at the beginning.

Most common and typical power factors for buildings, appliances and motors.

How to use the calculator from Volts to Watts: