With this calculator you can convert from VA to HP easily, quickly and free any electric power, the calculation takes into account the power factor.

For greater ease we explain that formula is used for the calculation, and how to convert from VA to HP in just 2 steps.

If you do not know the power factor and efficiency of the load in this section we give you the most common values: “power factor” and “efficiency”.

How to convert VA to HP in only 2 step: 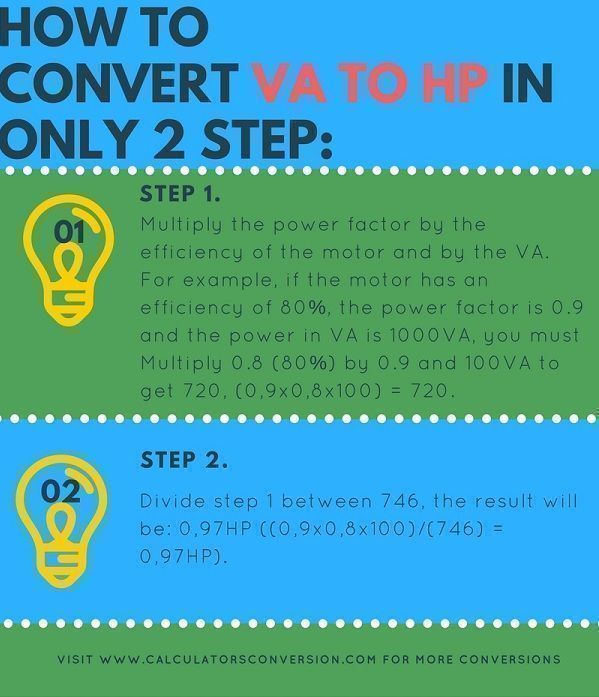 VA: VA is the unit of apparent power: It is the total amount of power consumed by electrical equipment.

This apparent power VA, commonly designated with the letter “S” is not really the “useful”, except when the power factor is unity (FP = 1), and points out that the power supply network not only has to satisfy the energy consumed by the resistive elements, but also has to satisfy that which “store” the coils and capacitors.

In other words, S (VA) is the sum of the power in P (Watts) (useful power) that dissipate the equipment in heat or work plus the power in Q (VAR) (power fields) used for the formation of the electric and magnetic fields of its components.

The equipment that present the power in VA are those that have components such as motors and electronic equipment, such as: televisions, computers, hydraulic pumps, refrigerators, air conditioners etc, these equipment if they do not have the power factor corrected internally they present a low factor of power (Fp = 0.9 or less) because in order to function they require, in addition to the Watts, another power, which are the VARs, between the latter two they make the VA, therefore VA = Watts + VAR.

Hp: The horsepower , also called power horse – since it is a measure of power and not force – and in English horsepower , is the name of several units of power measurement used in the Anglo-Saxon system . It denotes hp , HP or Hp , from the English term horsepower , expression that was coined by James Watt in 1782 to compare the power of steam engines with the power of draft horses . Later it was extended to include the output power of the other types of piston engines , as well as turbines , electric motors and other machinery.

Also it is denominated like PS , abbreviation of the German word Pferdestärke , which is translated like Horse of force .

The definition of the unit varies between geographical regions. Most countries now use the SI watt unit for power measurement.

Motor Efficiency: The efficiency of the electric motor is the ratio between the output power (mechanical) and the power input (electrical).

The output of mechanical power is always lower than the input of electrical energy, since the energy is lost during the conversion (electrical to mechanical) in various forms, such as heat and friction.

The design of an electric motor aims to minimize these losses to improve efficiency.

Most electric motors are designed to operate between 50% and 100% of rated load. The maximum efficiency is usually close to 75% of the nominal load.

P.f: The power factor is the ratio between the power of work “util” kW and the apparent power kVA , this measures the efficiency with which electric power is used and are related by this formula fp = kW / kVA.

A high power factor allows an efficient use of energy, while a low power factor indicates a poor use of electrical energy.

The working power ( kW ) plus the reactive power (kVAR) is equal to the Apparent power ( kVA ), kVA = kW + kVAR

Electrical motors constructed according NEMA Design B must meet the efficiencies below: