This impedance calculator calculates the Z in alternating currents, taking into account the resistance and inductive reactance of the load.

Formula for the calculation of impedance: 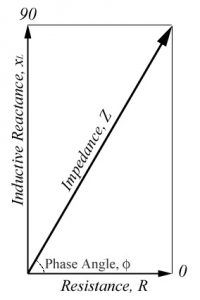 Since the lines form a right triangle, the Pythagorean theorem can be used to find the length (value) of the impedance line.

When this equation is rewritten to solve for Z, the impedance equation occurs in the presented form.

Are you trying to understand the electrical impedance? Chances are that if you’ve gotten into this topic in the past, you would have some jargon like phasors, phase relationships and even imaginary resistance. What is all this?

We are not all electrical engineers born in the university. Some of us are just playing with electronics in our free time and never find the rigorous mathematics you find in college. But that does not mean that understanding the impedance must be difficult. If you plan to work with electronic devices powered by AC, then you will want to know what the impedance is and what it is doing in a circuit.

The best way to understand electrical impedance is to compare it with something you are already familiar with: resistance . And this is where we are going to offer a summary of the impedance in a sentence in a few words:

The electrical impedance is just one form of resistance that depends on the frequency.

That’s. You can get away now and add one more word to your electrical engineering vocabulary or continue reading. When speaking of impedance, a form of resistance to a current is provided, according to the operating frequency of the circuit. But there is more.

Resistors have a fairly easy job in a DC-powered circuit; They resist the flow of current that flows through some type of metal such as copper. If you introduce a resistance of 220 K ohms in a DC circuit, you will obtain a definite reduction of the current between one side of the resistance and the other. Resistors, like other non-reactive components, may worry less about things like the frequency of the power supply. They’re just going to keep doing what they’re doing, resisting the same amount of current all the time.

But, what happens if you start working with AC-powered electronics? With AC, it is not just a matter of 5 V feeding a circuit. Instead, it has new variables to consider as the particular frequency of alternating current. Here, AC moves up and down at 60 cycles per second (60Hz).

The central point of all this is that in the electronics powered by AC not only need non-reactive components such as resistors to resist the current. It also needs components that can react to changes in current and frequency, such as capacitors and inductors; otherwise, your circuit will not work as expected. Put all this together, and you can almost think of impedance as the big brother of the resistance. The impedance includes both the resistance and the reactance. Or expressed as a relationship:

But what is the reactance?

The reactance comes in two different flavors, depending on which reactive component you are using, these include:

You will see this in the form of electromagnets that change the magnetic field in a circuit, also called an inductor. The inductors will have a low impedance at low frequencies and a high impedance at high frequencies.

You will see this in the form of an electric field of charge between two conductive surfaces, also called conductor. The drivers have a high impedance at low frequencies and a low impedance at high frequencies.

Place resistors, inductors and capacitors in an AC circuit, and not only have the opportunity to resist electricity, but also have the ability to store and release energy. While a resistor will maintain a constant resistance regardless of the changing conditions, the inductors and capacitors will change their resistance as a function of the frequency of the signal presented to them. And when capacitors and inductors resist and store / release energy, then you have a measure of impedance.

Table impedances recommended in transformers according to IEC

Part 5 of the standard IEC 60076-5: 2000 “Power transformers”, recommend a minimum impedance for transformers

Unlike other standards, such as IEEE or AS, which recommend typical values, IEC recommends minimum values.

Why do you have to pay more for a transformer when you can buy it cheaper by reducing% Z? The only time you will select a higher impedance for your transformer will be to reduce the fault current in the transformer.