With this calculator you can know the short-circuit level of single-phase or three-phase electric transformer.

Formula for calculating single-phase and three-phase short circuits of the transformers (kA):

How to calculate the short-circuit level of a transformer in 1 single step: 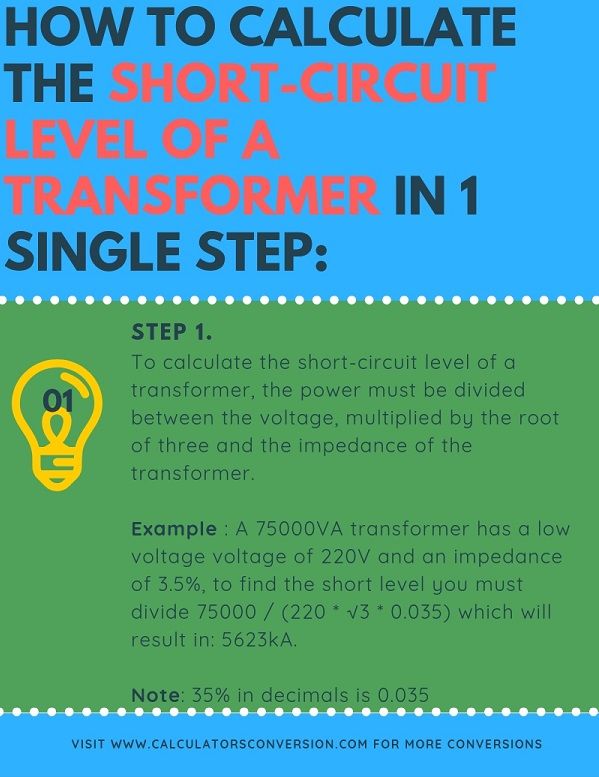 To calculate the short-circuit level of a transformer, the power must be divided between the voltage, multiplied by the root of three and the impedance of the transformer.

The transformer of an industrial plant is 500,000VA three phase, with a voltage of 4160V in the secondary and an impedance of 5%, which will be the short level of this transformer.

The transformer of a small building is 25000VA single-phase, with a voltage of 240V and an impedance of 3%, which will be the short-circuit level of the transformer.

Rta: // To find the answer you should only replace the variables in the short circuit level calculator and it will automatically give the answer of: 3472kVA.

The percentage impedance of a transformer is a measured value that is printed on the nameplate and is actually a voltage measurement.

It is a test that manufacturers do for power distribution transformers and is used in the calculation of the fault current. This is important for coordinating overcurrent protection devices (OCPD), short circuit analysis, harmonic analysis and electric arc studies.

If a transformer has an impedance of 6.33%, it would require 6.33% of the primary input voltage to generate 100% of the rated current in the secondary windings when a fault occurs in the worst case.

In electrical distribution systems, the worst failure is when a low impedance metal bar cuts through the lines and is called bolted failure.

Now, if 100% of the voltage is applied to the primary input, then approximately (100 / 6.33 = 15.8x nominal current), it would flow in the secondary winding under a fault in the worst condition. This is the maximum short-circuit current that we would have in the system.

Note: The short circuit levels presented in the above table are for reference and should not be used to size any type of electrical system.

How to use the short-digit level calculator:

Amps to Hp – Calculation, formula, chart. How many amps are in 1 HP?
kVA to Volts calculator, Formula, examples and table
Volts to Amperes - Calculator, how to convert, examples, table and formula
Amperes to VA - Convert, calculator, chart and formula
HP to kVA - Online Convert free