We explained how to perform the conversion from kVA to kW in a simple step by step, besides analyzing some examples and giving the most common values ​​of the power factor to facilitate the conversion.

To convert from kVA to kW you must have two variables: kVA and power factor, then you simply multiply kVAxFactor power, as reported by the formula and the result of this multiplication will be the kW. If you want to convert kVA to kW automatically you can use this tool .

It is important to know that the kW will always be lower than the kVA, this is because the power factor is always less than 1 (From 0 to 1) so that the multiplication of kVAxF.P = kW, will never result in a value greater than kVA (kW≤kVA)

Actually most of the plates characteristic of electrical equipment do not have the kVA because the common designation is done in kW, this is partly because many of them despise the power factor because they are very efficient electrical equipment, without However this does not mean that the equipment does not have fp, on the other hand most of the equipment that works with AC voltage has power factor, so if the plates do not inform you the fp we show you the tables with the most common values of the power factors for different engines, constructions and equipment in general.

How to convert from kVA to kW step by step: 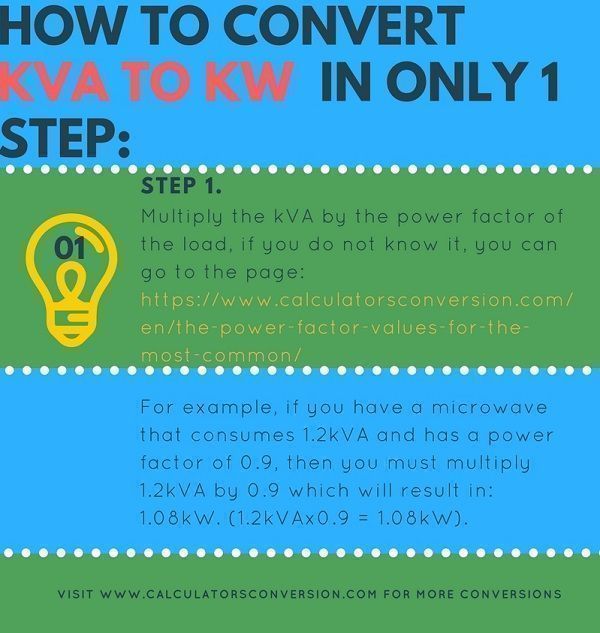 The calculation to convert from kva to kw is done simply by multiplying the kVA by the power factor of the load, if you do not know the latter you can use the ones shown here .