This calculator is used to convert BTU/hr to kW, you will also find the definitions, explanation and examples of conversion.

Commonly this BTU/hr to kW ratio is used for air conditioning systems or heaters, the measurement is expressed in terms of how many BTUs per hour the product can add to or remove from the air.

Formula to convert from BTU / hr to kW

How to convert from BTU/hr to kW in 3 steps 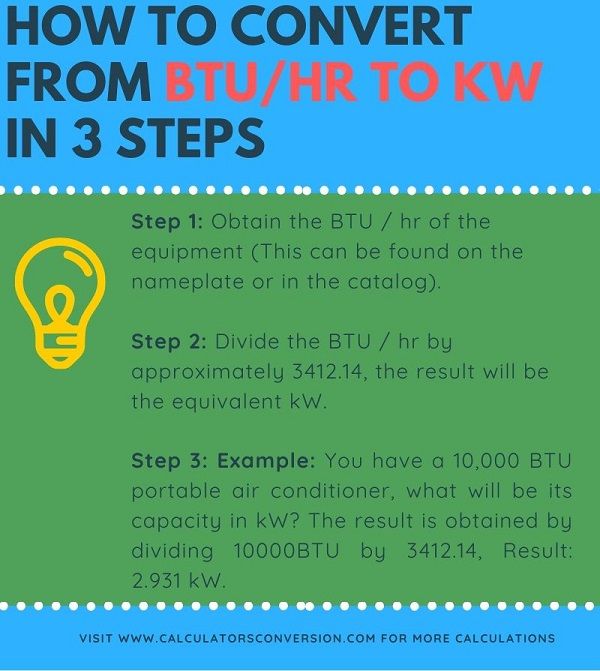 To get the kW from BTU/hr, just do the following steps:

In this table you will find some equivalences of the most common powers of BTU / hr to kW in air conditioning and heating equipment:

Commonly 3 kW air conditioners have decent BTUs. Those with 10 kW could easily cool a small house.

BTU denotes the amount of energy to raise 1 pound of water by 1 degree Fahrenheit. Honestly, this sentence only makes sense to the British. For those who are wondering how much it is, it is around 1055 joules. A July, in this case, is the energy that dissipates as heat.

BTU is a measure of energy, not power. To get power, we have to use some kind of time unit like time, for example: ‘This air conditioner can produce 10,000 BTUs of power per hour.’

History / Origin: The British Hourly Thermal Unit is based on the British Thermal Unit (symbol: Btu or BTU), a traditional United States traditional heat unit, where heat is a type of energy transfer in which the energy moves from A colder substance. BTU is specifically defined as the amount of heat required to increase the temperature of one pound of water by one F. It has several different definitions, all of which equal approximately 1,055 joules.

Current use: The British hourly thermal unit is not a widely used unit. Multiples of watt hours, often kilowatt hours, are used more frequently than Btu / h, even in the United States.

kW is the basic unit of power (in the metric system used by Europeans) and is basically the amount of power that we have to give to a 1 kg object to start moving with an acceleration of 1 m / s2. Kilowatts are only 1000 watts (watts). This phrase makes sense to Europeans who know a little bit of physics.

The base unit of the kilowatt is the watt, named after Scottish inventor James Watt. As is consistent with SI units, the prefix kilo means that one kilowatt equals one thousand watts or one thousand joules per second.

History / Origin: The base unit of the kilowatt is the watt, which is named after a Scottish inventor named James Watt. This was first proposed in 1882 by Sir Charles William Siemens, an engineer and entrepreneur, who suggested the use of the Watt name as a unit of power. He defined unity within the system of units in use at the time, and his definition was adopted in 1908.

Current usage: Kilowatts are used worldwide, generally to express the output power of motors and the power of electric motors, tools, machines, and heaters. The electricity used by a home is generally measured in kilowatt hours, or kWh, meaning 1,000 watts is applied over a period of one hour. Megawatts or gigawatt hours can be used in larger buildings or for industrial applications.