This is a simple way to convert from Joule to Watts, with this calculator you will make the conversion quickly.

Formula to convert and calculate from Joules to Watts, single phase, two phase and three phase:

How to convert from Joules to Watts in 1 single step: 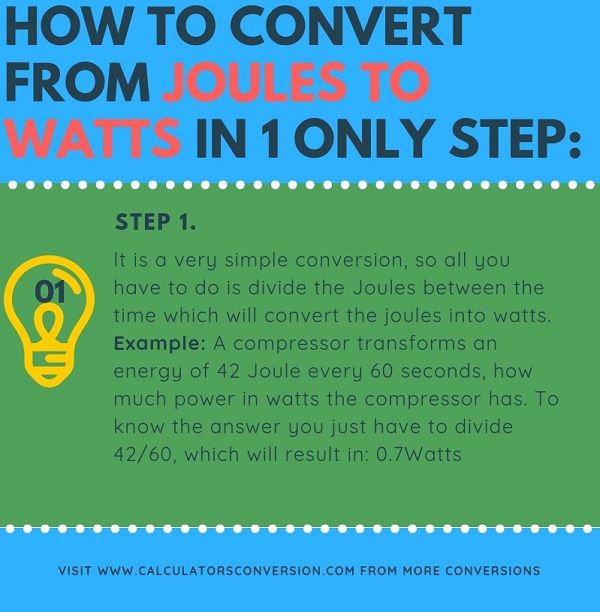 It is a very simple conversion, so all you have to do is divide the Joules between the time which will convert the joules into watts.
Example: A compressor transforms an energy of 42 Joule every 60 seconds, how much power in watts the compressor has. To know the answer you just have to divide 42/60, which will result in: 0.7Watts.

Examples of joule to watt conversions:

A boiler transforms 40000 Joule in just 60 seconds, how many Watts does the boiler have?

Answer: // The conversion is easily done with the formula that indicates the following: Watts = Joule / seconds, replacing the variables would be: Watts = 80000/60 = 1333Watts

An evaporator transforms the energy of 123000 Joules in 120 Seconds, which will be the Watts power of the evaporator ?.

Answer: // To get the answer you must divide the Joules between the time, therefore using the online calculator, we can get a response of 13000watts.

Note: In the previous conversions a time of 60 seconds is taken into account. For different variables, the calculator that appears at the beginning must be used.