Calculator from Hp to kVA can be somewhat overwhelming, however with this tool you could convert with just 1 click.

You will have the step-by-step explanation of how the conversion is done and what is the formula used for the calculation.

With the idea of ​​making things even easier, we present some illustrative examples, equivalence tables from Hp to kVA and common values ​​for the efficiency and power factor of electric motors.

The HP to kVA formula is applied to electric motors that can be single-phase, two-phase or three-phase, the difference of this formula with that of HP at kW is that it includes the  power factor .

⭐How to convert Hp to kVA in only 3 step 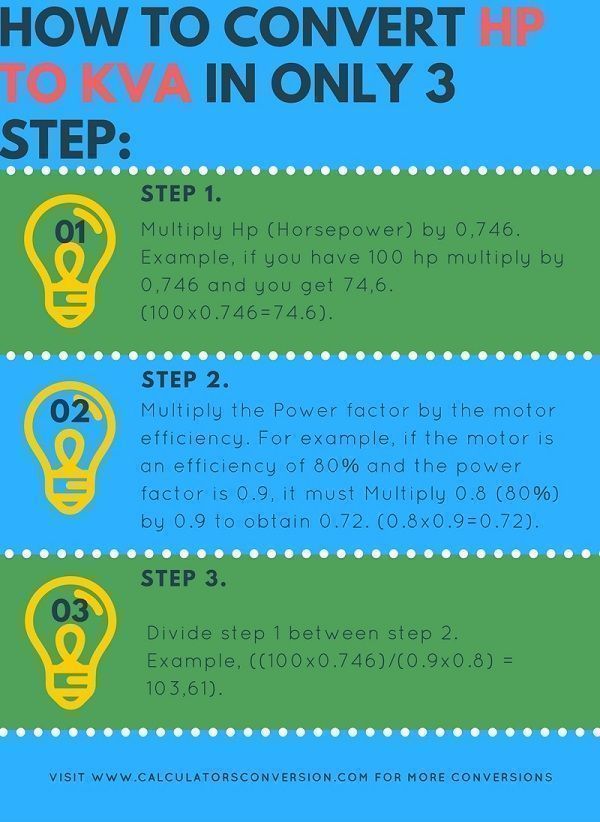 A steel bending machine has a power of 20Hp, with a power factor of 0.82 and an efficiency of 84%, how many kVA will the steel bender have?

An engine for an electric curtain has a power of 7.4Hp, a power factor of 0.88 and an efficiency of 90%, how many kVA does the curtain motor have?

Rta: // It’s simple, you just have to enter the previous parameters to the calculator shown in this article and you give it to calculate, the result will be 6.97kVA.

☝Difference and explanation of Hp and kVA

Horsepower is a unit of mechanical power, while kVA (kilovolt-amps) is a unit used to classify electrical power.

In electrical terms, 1 horsepower equals 746 watts, but the conversion of Hp to kVA also requires knowing the power factor of the electrical device and efficiency.

🔥 Most common conversions from Hp to kVA

1 Hp to how many kVA is it equivalent?

The answer is 1.17kVA, taking into account a power factor of 0.8 and an engine efficiency of 80%.

🎯Table Hp to kVA of conversion, equivalence, transformation (Efficiency of 85%, power factor of 0.88)

Note : The previous conversions are made with a power factor of 0.88, and an efficiency of 85%. For different variables you should use the calculator that appears at the beginning.

👌How to use the calculator from Hp to kVA

Then you must enter the efficiency of the motor , this value is characteristic of the motor and is a measure of the effectiveness with which electrical energy is converted into mechanical energy.

Finally you must choose the power factor , this factor indicates the efficiency with which you use electricity.

After having everything ready you must click on “Calculate”

Definition Power Factor, Ampere, Volt, kVA, kW, Motor Efficiency and Horsepower.
Calculation electric short circuit of single-phase and three-phase
The power factor values ​​for the most common equipment and appliances
kVA to Volts calculator, Formula, examples and table
kVA to VA - Calculator, How to convert in one step, How many 1 kVA to VA