With this efficiency calculator for motos you can convert and calculate online automatically in only 3 step, easy, fast and free any power associated with electric motors.

For greater ease we explain that formula uses the calculator with a table of the main efficiencies for motors, with different percentages of load.

We also show the most common power factors of different motors.

Formulas for calculating the efficiency of DC, AC, single-phase, two-phase and three-phase motors:

How to calculate in 3 step the efficiency of a three-phase motor: 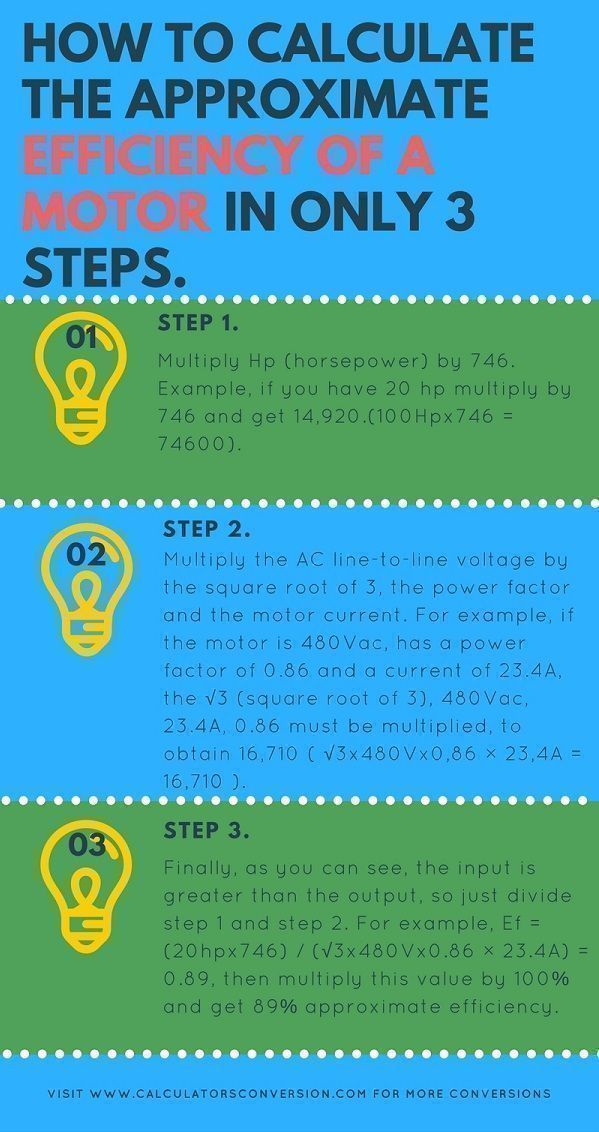 E (Efficiency) = The efficiency of the motor is the ratio between the amount of mechanical work performed and the electrical energy consumed to do the job, represented by a percentage. A higher percentage represents a more efficient engine. The efficiency of the electric motor depends on (but not limited to) the conditions of design, materials, construction, grading, loading, power quality, and operation.
The efficiency of any electric motor is its power output divided by the total input. To be valid, input and output must be expressed in the same physical units.

To divide that by the electric input into watts, the horsepower (hp) must be converted to the electrical equivalent by means of its equivalence (746 watt). (In the metric system, the watt or kilowatt is the measurement of both the output and the input, because different torque units are used.)

The input must always exceed the output, the difference being the internal energy loss in the motor. Thus, the output divided by the input can never equal or exceed the unit (100%).

HP = The horsepower, also called power horse – since it is a measure of power and not of force – and in English horsepower, is the name of several units of measurement of power used in the Anglo-Saxon system. It is denominated hp, HP or Hp, of the English term horsepower, expression that was coined by James Watt in 1782 to compare the power of the steam engines with the power of the draft horses. It was later expanded to include the output power of other types of piston engines, as well as turbines, electric motors and other types of machinery.

Idc = The DC current refers to the continuous flow of electric charge through a conductor between two points of different potential, which does not change direction with time. Direct current is produced by sources such as batteries, power supplies, thermocouples, solar cells, or dynamos. Direct current can flow in a conductor such as a wire, but it can also flow through the semiconductors, insulators, or even through a vacuum such as in electron or ion beams. Direct current is used to charge the batteries and as a power source for electronic systems.

Volts = The volt is the unit of the electric potential difference (voltage). The Volt is named in honor of the Italian physicist Alessandro Volta (1745-1827), who invented the voltaic battery, possibly the first chemical battery.

Electrical motors constructed according NEMA Design B must meet the efficiencies below: