This calculator is an online tool with which you can convert from kilovolt to Megavolts automatically, easily, quickly and for free.

In addition, we explain how to convert from kvolt to megavolt in 1 single step, with the help of the formula that is used for the calculation and with the table that has the main conversions from kv to megavolt.

Formula from conversion, calculate and transform from kilovolts to megavolts, single-phase, two-phase and three-phase:

How to convert or switch from kVolts to megavolts in only 1 steps: 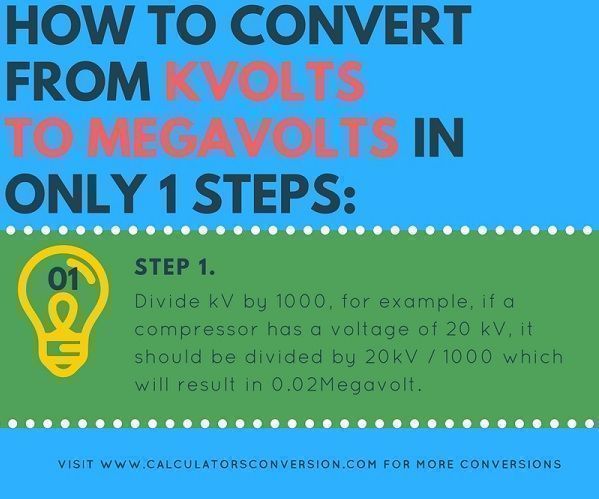 For a stable source of electric direct current (DC) potential, such as that of an alkaline or carbon-zinc electrochemical cell, the average and instantaneous voltages are both approximately +1.5 V if the negative terminal is considered common ground; the rms voltage is 1.5 V. For the standard service alternating current (AC), the average voltage is zero (the polarity is constantly reversed); the instantaneous voltage ranges from approximately -165 V to +165 V; The effective voltage is nominally 117 V.