With this tool you can convert online from kW to kWh automatically, easy, fast and free.

For greater ease we explain that formula is used for the calculation and a table with the main conversions of kW to kWh in conversions from kW to kWh.

More information on converting from kW to kWh:

How to convert kW to kWh in only 1 step. 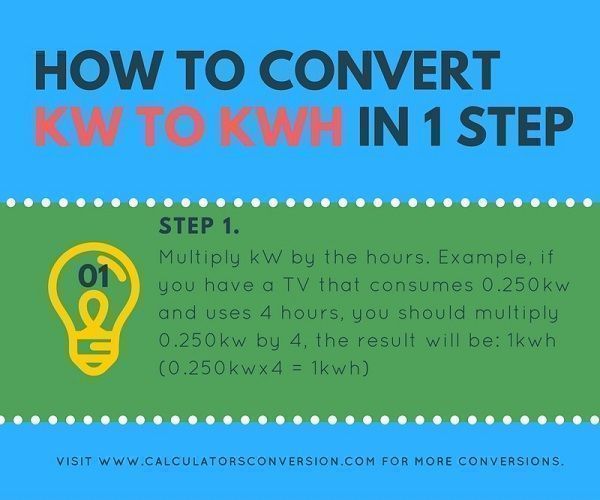 KW: is Working Power (also called Actual Power or Active Power or Real Power). It is the power that actually powers the equipment and performs useful work.

Resistive devices or loads such as heaters, incandescent lamps are rated in KW.

kWh: The term kilowatt hour is a term of consumption and is defined to see the power used over a period of time, in this case one hour.

What is the difference between a kW and a kWh?

Well, the difference is really very simple. Though it only seems simple after you understand it.

Electricity and other fuels supply energy in a form that we can use to run the equipment in our buildings.

The relationship between energy consumption (kWh) and time

Given the three figures above, we can easily see that the building used more energy over the course of 2009 than it did on February 16th 2010. No surprises there.

If we have the kWh from February and the kWh from March, we can’t really compare the two figures fairly, because February is typically 28 days long, whilst March is 31 days long.

Energy consumption expressed in terms of kWh doesn’t often mean much unless you also know the length of the period that the kWh were measured over. And it’s difficult to make fair comparisons between kWh figures unless they are all from periods of exactly the same length. Figures expressed in terms of power (e.g. kW) make many things more straightforward…

Power is the rate at which energy is generated or used.

The kW is a unit of power.

(Strictly speaking energy isn’t actually generated or used, it’s converted from one form into another. Like how the energy stored in oil is converted into heat when you burn it. And like how the electricity that runs a fan is converted into the motion of the fan blade (kinetic energy). But this is a distinction that people generally don’t worry about when they’re staring at an excessive energy bill and wondering how they can “use” less energy.)

So power is a measure of how fast something is generating or using energy. The higher a building’s kW, the faster that building is using energy.

The watt (W) is another unit of power. It doesn’t make it quite so obvious what power means. But the watt is actually just another name for Joules per second. J/s and W are the same thing. Just some bright spark decided that equations and whatnot would be simpler if power had its own unit (instead of being expressed using units of energy and time together). And they named this unit after James Watt, the Scottish inventor who had an important hand in the development of the steam engine.


If you can not find the conversion thank you for suggesting it: here