With this tool you can convert from CV to Hp, easily, quickly and free any CV.

For greater ease, we explain which formula is used for the calculation of Cheval-Vapeur to Hp, how to convert from CV to Hp in only 1 steps and table.

How to convert CV to HP in only 1 step: 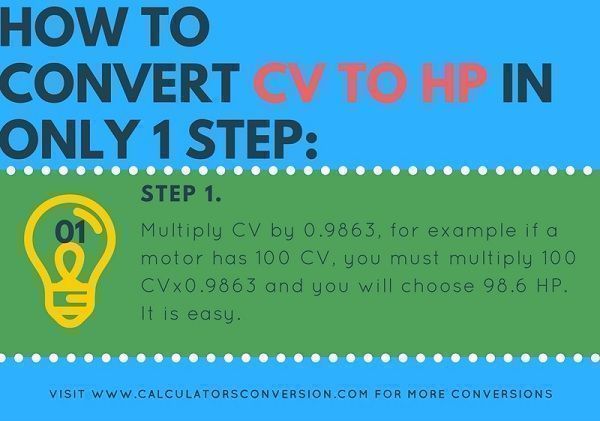 H.P = The horsepower, also called power horse – since it is a measure of power and not force – and in English horsepower, is the name of several units of power measurement used in the Anglo-Saxon system. It denotes hp, HP or Hp, from the English term horsepower, expression that was coined by James Watt in 1782 to compare the power of steam engines with the power of draft horses. Later it was extended to include the output power of the other types of piston engines, as well as turbines, electric motors and other machinery.

C.V = The horse of steam (CV) is a unit of power measurement that is defined as the power needed to vertically lift a weight of 75 kgf to 1 m in height in 1 s. When trying to impose the Metric Decimal System, originated in France, for the power unit we looked for a value similar to the English horsepower, but using decimal units. Thus was born the steam horse, cheval-vapeur in French (CV). In its definition (as seen at the beginning of this article) units of the Decimal Metric System are used. It is only 1.368% less than the English horsepower.